As promised, I’m posting my first 4 weeks of my self imposed weekly challenge.  I can say at this point this little exercise has made my creativity BOOM!  Here  I am 7 weeks later and I have so many ideas I had to start making lists of future projects so I could get them out of my head and focus at my tasks at hand.

I’ve also made a decision to open the dreaded UFO (Unfinished Objects) Boxes.  For those who don’t quilt, this may be a new term to you.  But for us obsessive compulsive quilters, we have MANY of these items.  Patterns we’ve tried and didn’t like or got stuck on.  New techniques we wanted to try and learn and have basically a sample of an item. Even items that life got in the way of or a lack of a certain supply we needed to finish and it got put on the back burner.  End result, I have pulled them out, ok, I’ve pulled out SOME of them, and have made another self imposed challenge to finish them up or incorporate into something useful.  If I really find something that I don’t even want to deal with, I will offer it to my fellow quilters in my Quilt Guild.

Back to week 1.  This was how it all started.  I had seen the AWESOME portrait art quilter, Tammie Bowser, on Quilting Arts TV Episode 1607-2 while I was catching up on my 1600 series of shows, and was fascinated with her technique.  I wanted to create one of these of my little Miss Bailey, but knew I had to learn and master the technique before taking on a portrait.  Now they do have a free Gerber Daisy Pattern, which had disappeared being uploaded, and when they did finally get it up, I had to finish some quilts with deadlines in process so it became one of my UFOs… see where this is going? LOL  Eight months later I got back to this one.  It’s another reason why I’m doing the self imposed challenge.

I never did do the Gerber Daisy from Tammie. I chose to use one of my own flowers.  I was also really overwhelmed looking at pixel boxes of her pattern and decided I needed to modify the technique of how to make the pattern that made sense to me and was a little easier on my eyes.  She used a free program to turn the photo into ‘boxes’ of value pixels.  I don’t have the program and it’s no longer available anyways.  So being a Digital Artist, I felt I could wing this on my own.

Choosing the flower was easy, a coneflower.  One of my favorite flowers in the garden.  For this first one, I simply had the photo blown up and printed at my local Staples store.  They ‘accidentally’ printed on a thicker poster paper instead of the thinner Engineering paper I had requested. They thought they were doing me a favor. LOL   A lot more difficult to see through as I was tracing my pattern.  Now they understand why I’m printing these photos and their purpose.

I also had it printed in color this first one.  Next time, need to do a black and white only.  Easier to see also.  Then I could just deal with values and not worry about color.  I found when I printed this in color, I became obsessed in trying to match up the colors and even dyed a few swatches of fabrics to fit in.  NOT what I wanted this exercise to be.

Lesson 1:  Use my Photoshop to convert to a black and white photo for my pattern.  Will be less inhibitive to my creative flow.

Lesson 2: More of a hind sight, but next one I will use Photoshop filters to set my values and maybe even the cut lines for the pattern added.

Lesson 3: Decide the number of values and colors in the beginning.  Saves some aggravation later.

Onto the technique I wanted to learn.

Tammie uses a different kind of fusible web than I had always used.  Hmmm a little more money, but might be worth it.  She uses Steam a Seam 2.  The advantage is that it is a little sticky after removing the paper unlike regular fusible web.  I could see how handy this was while assembling.  Ok, broke down and bought some at Amazon, even though I had a ROLL of Head N Bond Light sitting on my shelf.  It comes in 9″x12″ sheets for the printer and needs to be cut down to print if you don’t have a wide format printer like I do.

She prints out the image onto these sheets of Steam a Seam.  I chose just to trace by hand. I numbered by values as I traced and put a big X in the background areas.  Wasn’t sure at this point how I wanted to handle the background other than I wanted a graduated color from dark to light as a sun ray might look.

Lesson 4: Make sure to print or trace onto the paper side that is less sticky.  If Tammie knew this, she neglected to mention it on the show.  Learned since I made this that Steam a Seam has a lightly sticky and a heavier sticky side.  You want the lighter sticky on top where your pattern is so that while cutting out the template pieces it sticks more to the foundation fabric than the template pattern.

Next step was to use a cheap muslin fabric for a foundation background and peal the paper backing off one side of the fusible web and adhere it to the muslin.

Next step for Tammie was to use an exacto knife and small scissors to cut away that top paper (being careful not to cut through the web and fabric below.  Ok, THIS was NOT working for me.  I had way to many times during this first one where I cut completely through and made a mess of it. Sure, practice made it better, but I did NOT like this at all. Had to be a better way…. for me at least.

She then used the cut away paper top as her pattern to cut the fabric. Adding a scant 1/8″ border around so that the pieces overlapped just slightly to avoid any background showing.  Hmmmm it doesn’t stick like a freezer paper template would while cutting.  Slipping all over.  Made for too much of an inaccurate cut for my liking.  But, keep going.  Don’t give up on this technique yet.

Then you simply take your cut fabrics and place them in the exact spot you cut the top paper template from.  Because Steam A Seam is sticky, you can remove and adjust easily.  Nothing is permanent until you iron it down.  I LOVED THIS!  OK, sold on the product at this point, just not the process. 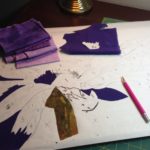 Process of cutting out template pieces from dark to light values and adhering to foundation. 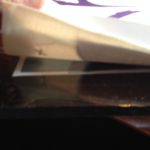 Shows how my printed photo was taped under a piece of plexiglass I had laying around. I ended up putting this on my lightbox to trace the pattern. 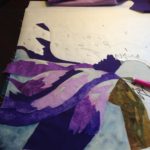 Move pieces added. Decided it was better to work across image than to do the values in order. Painted a corner of the background during… decided I didn’t like it. 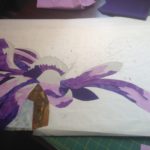 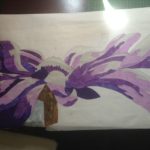 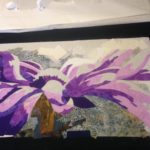 Decided to take cut up scraps of fabric and make a collage background. Came out ok, but won’t do again. Just not my style.

Next step was to quilt.  I made my quilt sandwich and mostly just did as Tammie did by quilting the edges and “doodle quilted”, (her term of an all over small quilting random pattern), over the background areas.  I wanted a sketchy artsy look and did thread sketching with black thread like it had been drawn onto the fabric.  Was not so easy to do…. Can not tell you how many thread breaks I had… nor will I tell you how many times I had to walk away so I didn’t throw my sewing machine out the window. LOL

Lesson 5: This Steam a Seam 2 was too heavy or thick for any detailed thread sketching.  Made for a lot of frustrations during the quilting.  Might have to stick to my feather weight or light weight Heat N Bond fusible web next one.  I understand this product is great if you don’t want to sew down all the edges, but it just was not the end result that wanted and had in my head.

Added a black binding to finish and look like a framing of the art. 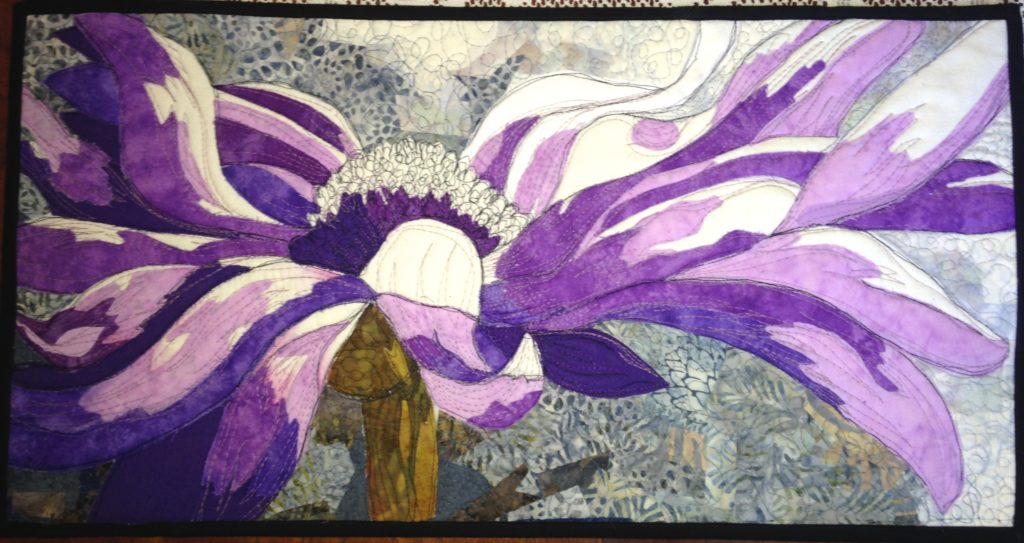 I kind of lost the excitement of this art piece at this point.  I didn’t like the process, I didn’t like the end result as much as I thought I would.  The number of values was too little for my liking, the collage background was so not my style and it looked more like an abstract art to me than I wanted.  Everyone else liked it… just not me.

I take notes while I’m learning a new technique.  So it was off to the web in search of how some other quilt artist’s techniques worked and to pick some brains of fellow art quilters I know.   Come back for the next few weeks challenges to see how I started combining processes, changing up some techniques and products to better get to where I wanted to go.  I will just chalk this one up to bunch of lessons learned. 🙂 What works for others does not always work for me.  I still LOVE Tammie’s work, but need to find a way to make it easier for myself and to make it my own also.

Leave us your email to receive new posts and special offers for members only! Don't miss a thing!

This site uses Akismet to reduce spam. Learn how your comment data is processed. 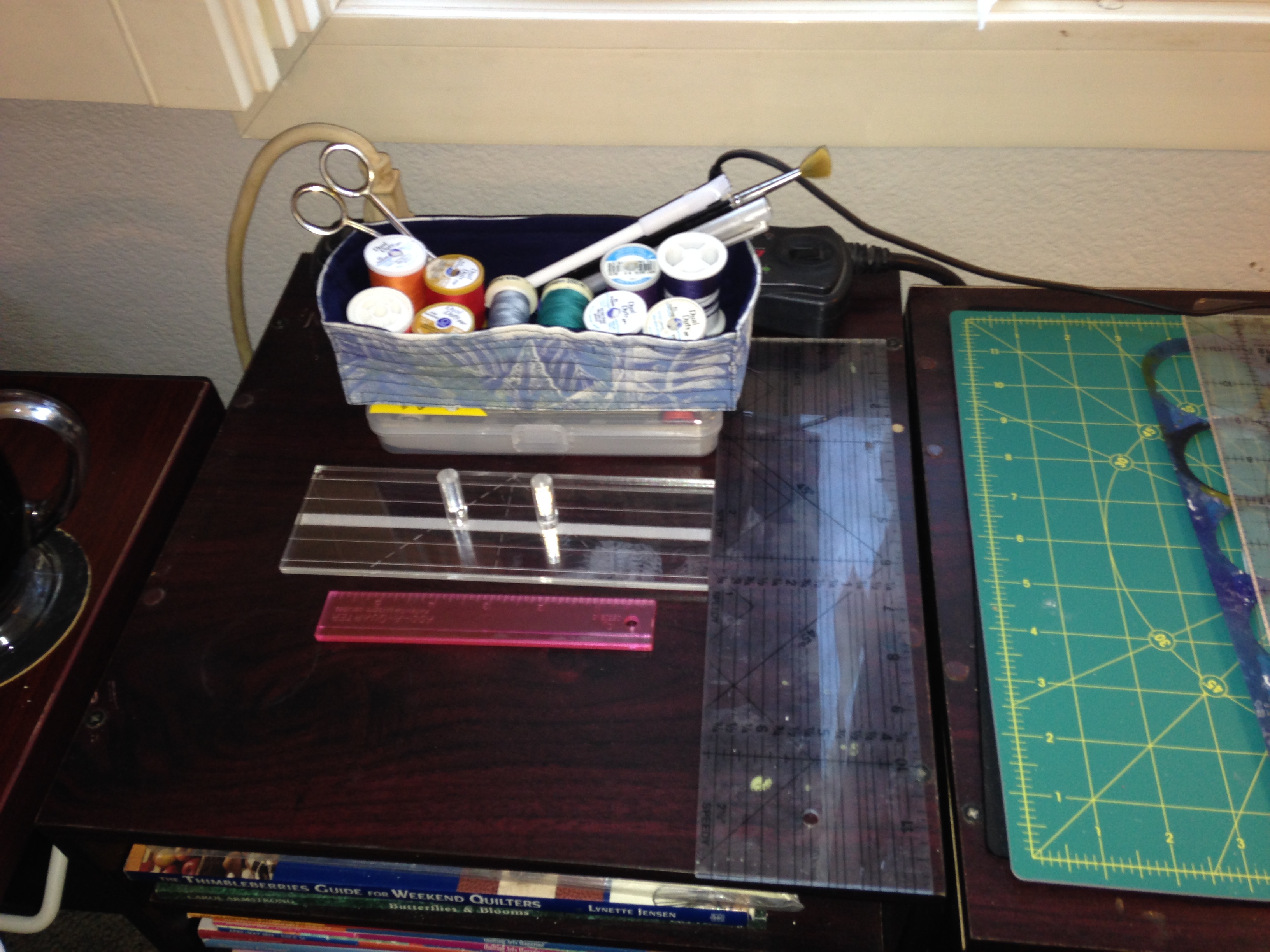 Welcome! This is a great section to talk a little bit about who you are!